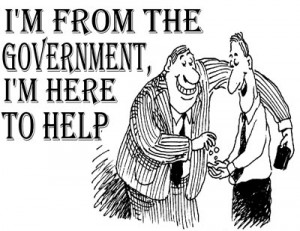 While a majority of households say they’ll be hurt by higher borrowing costs, they are much more concerned about the rising cost of living, according to polling late last month by Nanos Research Group for Bloomberg News.

Almost nine in 10 Canadians – or 87 per cent – say they are more worried about the current pace of rising prices than they are about higher interest rates, the survey found. Only 10 per cent see rising borrowing costs as the bigger issue, with 3 per cent unsure.

The survey illustrates the extent to which inflation and cost of living have become the top source of anxiety.  Canada’s inflation rate has been hovering near 5 per cent in recent months, levels not seen since 2003.

It’s amazing what happens when sovereign governments decide to pull out the printing presses and print money with impunity!

Where we now find ourselves is a great example of why the nine scariest words someone could ever hear is:

“I’m from the government and I’m here to help”.